The natural area of South America is characterized by the high mountains of the Andes in the west, the mountainous countries of Brazil and Guiana in the east and the wide lowlands of the great rivers Amazon, Orinoco and Paraná. The continent’s climate is tropical, with the exception of its southern parts. The lowlands near the equator are therefore covered by impenetrable tropical rainforests. In the Andes, the climate and vegetation vary greatly with altitude.

The high cultures of Native Americans, such as that of the Incas, were destroyed during the colonization of the continent by Spanish and Portuguese conquerors. After almost 200 years of state independence, most countries are still underdeveloped developing countries or emerging countries. Many countries have great social differences between rich and poor, which lead to ongoing political instability and frequent conflicts. 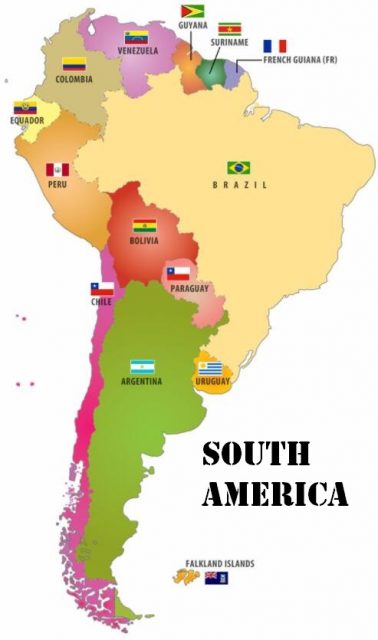 With an area of almost 18 million km², South America takes up about 12% of the mainland of the world. It is more than 7,600 km from the northernmost point to the southern tip of South America. The largest west-east extension is almost 5000 km.

The west coast of South America is not very structured. The estuaries of the large streams cut deep into the east coast. In the south, the mainland mass dissolves into thousands of islands (pictures 1 and 2).

The western part of South America is shaped by the Andes, which are the continuation of the North American Cordilleras. The approximately 8000 km long and up to 700 km wide young fold mountains reach their highest height with the Aconcagua (6960 m). It is structured by a large number of mountain ranges with deep longitudinal valleys. The mountain ranges often include wavy highlands or plateaus, such as the 200 km wide Altiplano of Bolivia.

The Andes rise out of the narrow coastal plains of the West like a wall.

On the other hand, parallel to the west coast of South America is an elongated deep-sea trench, the Atacama trench, which is up to 8066 m deep.The height differences in this room are up to 15000 m. They are the result of the mountain-forming endogenous forces that have been active since the Tertiary.

A large number of active volcanoes and recurring earthquake disasters in the Andean countries indicate that the earth’s crust is still in motion.

In the east of South America, low mountains and table countries predominate.

The Brazilian Highlands has 5 million square kilometers area half the size of Europe. Although it rises up to 3000 m, it largely has the character of a low mountain range.

North of it, separated only by the Amazon, lies the much smaller mountainous region of Guiana. Like the Patagonian plateau on the southern tip of the continent, both mountain countries are fragments of the primary continent of Gondwana (Fig. 4). Between the mountainous countries are extensive basin landscapes that, like the lowlands of the Amazon, are traversed by the great currents of South America.

The main streams of the continent are the Amazon, the Orinoco, the Paraguay and the Paraná, all of which flow to the Atlantic. With their tributaries, they enable large parts of South America to be connected by water.
The Amazon is the richest in water and, at around 6500 km after the Nile, the second longest river in the world. In contrast, only short rivers flow into the Pacific, since the Andes that form the watershed between the Atlantic and the Pacific run through the continent far to the west.
South America’s largest lakes, such as Lake Titicaca and Lake Poopo in Bolivia, are located primarily on the Andean plateaus.

Large parts of South America are in the tropics (Fig. 6). The temperatures here are high all year round. In the Amazon lowland, annual rainfall can reach up to 27 °C. That is why tropical rainforests dominate the vegetation here.
Precipitation decreases from the equator to the north and south. Savanna (wetland, dry and thorny savannah), sparse dry forests and scrubland are therefore common in the mountainous countries of Brazil and Guiana.

The subsequent subtropics include large parts of Argentina and Uruguay with grass steppes (pampas) in the Argentinean lowlands and dry or desert steppes in eastern Patagonia. The southern part of the continent extends into the temperate latitudes, Tierra del Fuego even into the subpolar climate zone.
This zonal structure of climate and vegetation is modified by the Andes:
The Andes act as a climate divide.
The narrow coastline of the west coast is therefore mainly influenced by the Pacific. This brings extremely high rainfall to the north, with an annual average of more than 5000 mm of rainfall on the Colombian coast. On the other hand, a coastal desert, the Atacama, has formed on the coast of Chile in the area affected by the cold Humboldt Current.

On the other hand, the climate in the Andes region is determined much more by the altitude than by the latitude. The decrease in temperature with increasing altitude has led to the formation of altitude levels in the climate (Fig. 7), which in turn result in a vertical structure of the vegetation:
– “tierra caliente” (hot country),
– “tierra templada” (temperate country),
– ” tierra fria ”(cool country),
-“ tierra helada ”(cold country).

Depending on the amount of precipitation, however, different types of vegetation can develop in one level of the climate. In humid regions of the “tierra helada” B. the Paramo vegetation with heather and laurel-like shrubs, in drier the Puna vegetation with dry grasses and cacti.

With almost 400 million inhabitants, South America accounts for almost 6% of the world’s population.

The population is very unevenly distributed with an average population density of 21 inhabitants/km².

Although there are large, sparsely or not at all populated areas, the attraction of the metropolitan areas in South America and the ever increasing urbanization is very great. As a result, there are now 29 million cities in South America, 13 in Brazil alone. The major population agglomerations, such as São Paulo in Brazil, Buenos Aires in Argentina or Santiago in Chile, are mostly located on or near the sea.

The standard of living has developed positively in most countries in recent decades, particularly with regard to health care and schooling. According to Countryaah, the majority of the population still lives in poverty, e.g. T. at the edge of the subsistence minimum. This is particularly true for the urban population. The rural exodus has increased in recent years.

In the hope of better living conditions, people flock to the large metropolises that are growing uncontrollably and whose centers are often surrounded by slums, known as favelas in Brazil.
The root cause of social emergencies is the traditionally unequal ownership structure. In almost all countries, the vast majority of the wealth is concentrated in the hands of a vanishingly small upper class, which, despite some democratization successes, continues to exercise political power.

The countries of South America are developing countries with the exception of Argentina and Brazil. Together they are the most indebted region on earth.