Canada, the United States and Mexico make up North America, which is one of three parts of the great continent called America. The other two are Central America and South America. Some islands, such as Greenland (belonging to Denmark), Bermuda (connected to the United Kingdom) and Saint-Pierre and Miquelon (French territory), are associated with North America.

The area between the Appalachians and the Atlantic Ocean in the east is a low-lying coastal plain. Another large low plain extends from the Rocky mountains to the Appalachians. A high central plateau occupies the region between Mexico’s eastern and western mountain ranges.

The Great Lakes, in central-eastern North America, make up the largest freshwater area in the world. Most of the other large lakes in the subcontinent are further north in Canada. The largest river system in North America is that of the Mississippi River. On its way to the Gulf of Mexico, Mississippi receives waters from the Missouri and Ohio rivers. Together, they drain the central United States.

Much of North America has a mild climate, both in summer and winter, with moderate rainfall. However, in most parts of Alaska (which is an American state) and northern Canada, winters are freezing, and in summer, which lasts a short time, the temperature does not rise much. The climate in parts of the southwestern United States and northwestern Mexico is very dry, with desert and semi-desert regions.

The mountainous parts of North America include large areas of dense forests. On the north coast bathed by the Pacific, conifers, redwoods, pines and spruces grow; in Mexico there are forests of tropical hardwood trees. In deserts and icy northern regions there is little vegetation. Prairies form a belt between forests and deserts, mainly in the Great Plains region, in central North America.

Wild sheep, mountain goats, moose and red deer are among the native animals of North America. There are also cougars, lynxes, coyotes, wolves and bears. In some regions it is possible to find deer. Some small animals, such as squirrels, rabbits and raccoons, have adapted to the inhabited areas and live with humans. In the warmest regions of the south live alligators, snakes, wild pigs, colorful birds and monkeys.

Nature has been devastated by the action of man. By the middle of the twentieth century, the United States had already wiped out much of its fauna, cut down more than half of its trees and converted much of its grassland into agricultural land. The justification for this was the opening of space for the development of cities. In the second half of the 20th century, with the awareness of the need for environmental preservation, the countries of North America began to take measures to protect the remaining flora and fauna. 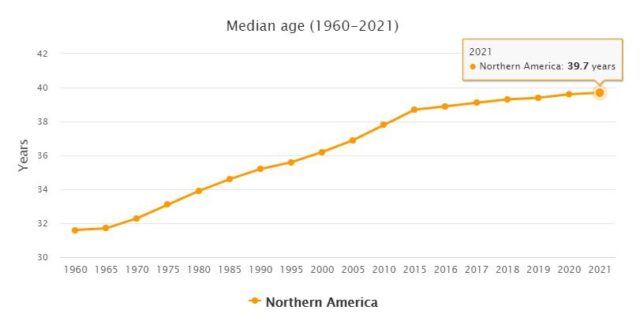 According to Countryaah, with population of 579,024,000, North America contributes to 7.5% of the world’s population. The original inhabitants of North America were Native Americans, or Indians. More than 80 percent of Mexico’s population descends at least in part from Indians. The majority of the population in the United States and Canada are of European descent. A significant minority of inhabitants of the United States are of African descent who were brought into the country as slaves.

Most people in the subcontinent follow Christianity. Canada has more Catholics than Protestants, and in Mexico the majority are also Catholic. All the world’s major religions are represented in the United States, although more than half of the population follow Protestant denominations. There are Jewish and Muslim minorities in the United States and Canada.

In general, the inhabitants of Canada and the United States have a good quality of life. The level of literacy is high. Although hospitals and medical institutions are among the best in the world, part of the population, especially in the United States, is exempt from free medical care. There is a lot of wealth, but there is also a lot of poverty, because the gap between rich and poor is great. In Mexico, living conditions are lower than in the United States and Canada. There are few wealthy people, and health and education services are less available.

The economy of the United States and Canada has long depended more on the manufacturing sector than on agriculture. This sector started to grow rapidly also in Mexico, at the end of the 20th century. Chemicals, food and electronics, transportation equipment and other types of machinery are among the main items manufactured in North America. At the end of the 20th century, industries that provide services to the public, such as the banking, healthcare, communications and tourism sectors, started to form the most important part of the subcontinent’s economy.

North America produces much of the world’s food. Wheat, corn, soybeans, hay, fruits, vegetables and dairy products are produced in various regions of the United States and Canada. In Mexico, sugarcane, corn, sorghum, bananas and other tropical vegetables and fruits are grown.

North America is also rich in natural resources, including minerals such as iron ore, copper, nickel, zinc, lead and silver. There are coal reserves in the United States and oil in the south-central United States, Alaska, western Canada and eastern Mexico.

According to AbbreviationFinder.org, the first inhabitants of North America came from Asia between 60,000 and 20,000 years ago. The first to arrive were the peoples who would become the Native Americans; over time, they moved south. The Inuit (Eskimos ) arrived later and remained in the north of the subcontinent.

Agriculture was already practiced around 3500 BC The Olmecs, in what is now Mexico, were the first to form a civilization, from around 1200 BC They built villages in which commerce was practiced and developed a way writing. Later, the Maya and the Aztecs built cities, pyramids and monuments.

A Viking named Leif Eriksson may have been the first European to reach the lands of North America. He landed in present-day Canada around 1000 AD But the Vikings did not establish permanent settlements in the region. At the end of the 15th century, Europeans began to explore the American continent and found colonies. In general, the Spaniards dominated the south (present-day Mexico and Central America), the French, the north (present-day Canada), and the English, the middle part (which today is the United States). In the 1760s, the British took over much of the northern subcontinent.

The United States was formed in 1776, when the thirteen British colonies established in its territory declared independence. Mexico became independent from Spain in 1821. Canada formed a separate government within the British Empire in 1867 and officially became an autonomous country in 1931.

Mexico remained more connected to its Amerindian origins, but its economic development was less. The United States has attracted many immigrants from Mexico. In 1992, Canada, the United States and Mexico signed the North American Free Trade Agreement (NAFTA), which aims to promote business between the three countries.