Africa is the second largest continent on earth. The surface shape is characterized by spacious pools and thresholds, in the east by trench systems with large lakes. Africa is almost entirely in the tropics and therefore has all tropical climates and vegetation zones.

The majority of African countries are predominantly agrarian structured developing countries. Poverty, hunger and high child mortality are mass phenomena in many countries. Due to their underdeveloped industry, the states are heavily dependent on the industrialized nations and are often heavily indebted. Political instability and ethnic conflicts often characterize the situation in the countries. 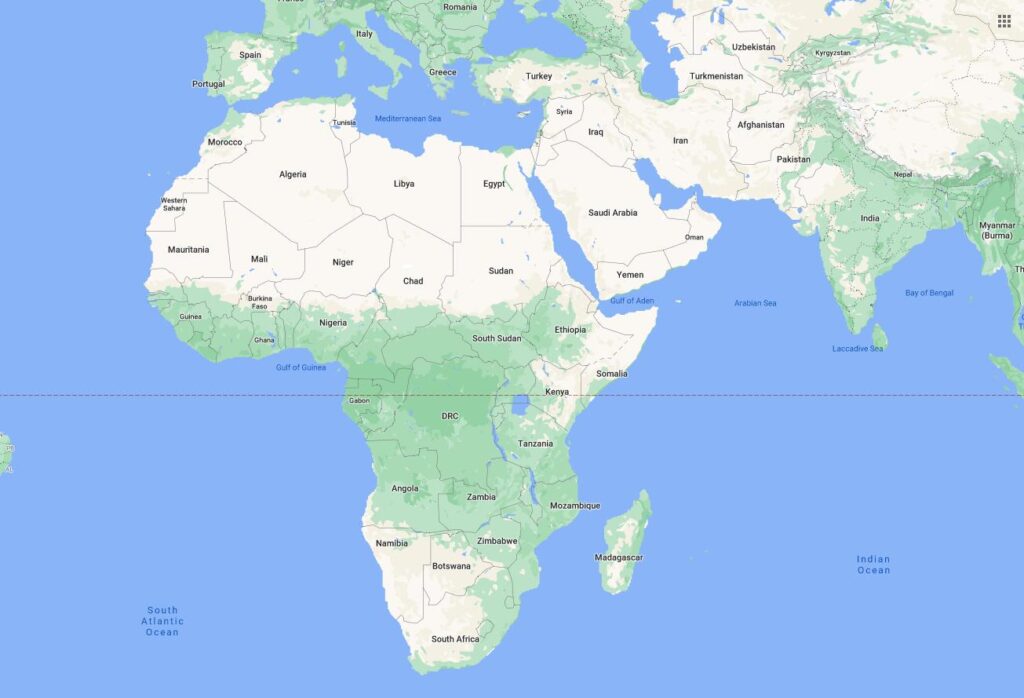 Africa is the second largest continent after Asia. With 30 million km², it takes up a fifth of the earth’s land area and is three times the size of Europe. It is approximately 8000 km from the northernmost point of Africa to the southern tip. The largest east-west distance is approximately 7600 km (Fig. 1).

Africa is almost halved by the equator and extends approximately equally far north and south to the 35th parallel. In comparison to Europe, the coast is only weakly structured. There are only a few islands in front of it, of which Madagascar is the only large one. Africa is separated from Europe by the rupture basin of the Mediterranean. It is only directly connected to Asia on the isthmus of Suez. It is separated from Asia by the Red Sea ditch.

Most of the continent consists of the old, rigid African plate. The geologically young Atlas is an exception. The relief is largely determined by plateaus or plateau countries that rise in the south and east on average over 1000 m (High Africa). More than half of the continent is less than 500 m (Lower Africa). Large-scale rises and falls in the Tertiary created today’s surface shapes. Africa is the continent of the basins and thresholds (Photo 2). Shallow pools lie between the likewise flat sleepers. The Niger, Chad and Weissnil basins are connected to the smaller drainless basins of the Sahara to the south.

In Central Africa follows the huge Congo basin, which is closed to the north by the north equatorial threshold, to the south by the Lunda threshold.
In the center of South Africa is the Kalahari basin, which is bordered in the southeast by an old mountain system (in the Drakensberg mountains up to almost 3500 m high).

East Africa from the Red Sea to the Zambezi runs through the East African Trench System and the Central African Rift Valley. Here plate parts drift apart. In connection with this are the formation of lava blankets and volcanoes. The highlands of Ethiopia are covered with basalt ceilings up to 2000 m thick. To the south of it, high, mostly inactive volcanoes rise on the edges of the ditches. These include the highest mountains in Africa, the 5895 m high Kilimanjaro and Mount Kenya (5194 m above sea level). 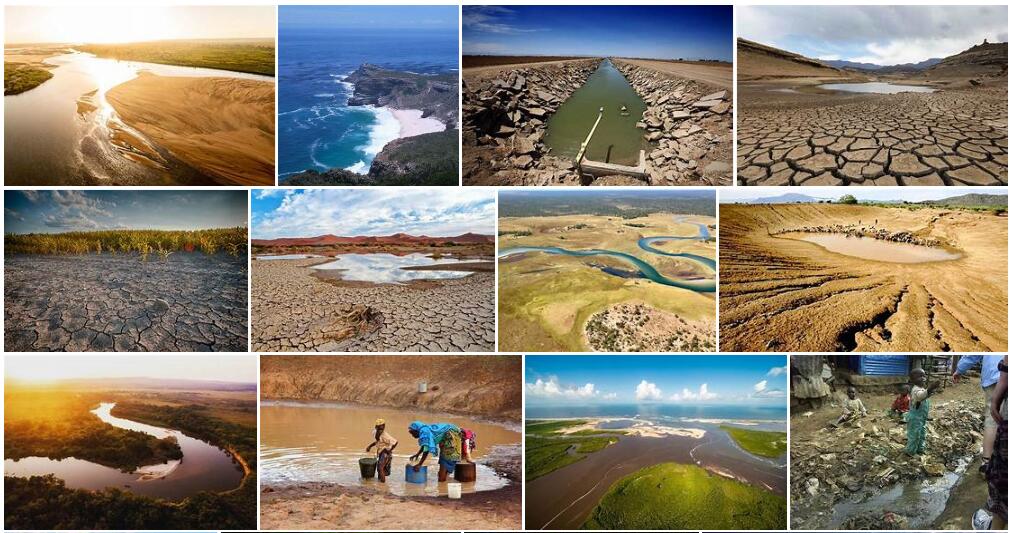 Large trench lakes with considerable depth such as Lake Tanganyika (up to almost 1500 m deep), Lake Malawi or Lake Albert were created in the trenches in East Africa. The largest lake in Africa, however, is Lake Victoria. As a typical round Beckensee, it only reaches a maximum depth of 80 m. In the basins of the arid areas there are drainless lakes, e.g. B. Lake Chad in the basin of the same name, or extensive salt lakes and pans are formed by the high evaporation, such as the bulkheads in the Algerian Sahara on the southern edge of the Atlas Mountains in Algeria and Tunisia.

The most powerful rivers in Africa, including the Nile (with 6671 km the longest river in the world), Congo, Niger and Zambezi, develop in the tropical wetlands. The streams break through the thresholds on their sides facing away from the basins with mighty waterfalls and rapids. In the subtropical winter rain regions of North and South Africa, the rivers only carry water periodically. In the desert-like arid regions there are only the episodically drained wadis.

Due to its location on both sides of the equator, Africa has the climate and vegetation zones in an almost ideal arrangement (Fig. 6).

The always humid tropics at the equator with high rainfall all year round and constant temperatures around 25 °C are the zone of the tropical rainforests. To the north and south are the alternating, moist tropics. Two rainy seasons alternate here with a short summer and a longer winter dry season. The changeable tropics are the zones of the savannah ; First the wet savannah (Fig. 7) with meter-high grasses (elephant grass) and evergreen trees standing in groups or forming light forests. Towards the northern and southern fringes of the tropics, the two rainy seasons merge into one in summer.

The rainy season becomes shorter and shorter with increasing distance from the equator and brings less and less rainfall. The savannas are therefore initially transformed into dry savannas (Fig. 8) and further north into thorn savannas.

Finally, the savannas pass into the subtropical semi-deserts and deserts, into the Sahara in the north and into the Namib in the south, where only episodic precipitation falls.
The north and south coasts have a Mediterranean climate.

Based on Countryaah, the African continent is inhabited by over a billion people. The population density fluctuates very strongly (Figure 10). Large areas are not or only sparsely populated (e.g. the Sahara). Gun dreams, such as the industrial and mining centers of Nigeria or South Africa, the coastal cities or the Nile Delta, are extremely densely populated.
The population growth is extremely high. In Africa in 1950 there were still 222 million people, compared to 730 million in 1996. Urban growth is weaker than in rural areas, where 80% of Africans live.

In connection with the spread of the immunodeficiency disease AIDS, however, an opposing tendency is developing in some regions of Africa up to the collapse of all public life.

Africa is the core area of ​​the dark-skinned Negrids. They represent the largest part of the population in the area south of the Sahara (sub-Saharan Africa). In addition to more recently immigrated Europeans and Asians (or their descendants), smaller groups of the population also live in Black Africa. B. the Pygmies and Bushmen (Fig. 11). The light-skinned Arabs and Berbers predominate in North Africa.

In the southern countries of the continent, u. a. in South Africa or Namibia, white Europeans as a minority play a large role until recently the decisive role in politics and business.

Christianity and Islam stand out among the religions. Islam dominates from North Africa to the countries of the Sahel and in the countries of East Africa, except in Ethiopia and Eritrea. Christianity is well represented there and in the states on the west coast south of the Sahel.
Many Africans maintain traditional natural religions and cults. So the Vodu comes from West Africa and has z. B. still a lot of followers in Benin. Such cults and rites have often mixed with the major religions.

The standard of living in most African countries is very low by global comparison. Apart from a few countries in North and South Africa, a large part of the population in the rest of Africa is very at risk of poverty, hunger, illness (the highest rate of AIDS in the world) and wars, which lead to large waves of refugees.

Africa is largely agricultural.
In agriculture, however, primitive forms of economy predominate.
In the tropical rainforest, arable land is obtained through slash-and-burn. However, these are only fertile for a short time and must be created again and again at new locations. The farmers therefore “walk” through the forest with their fields. The most important tools are the hoe and digging stick. This is why this less productive form of economy is called hack building.
Chopping is also common in the savannas.
Traditional land use is mostly for self-sufficiency because the low productivity does not allow the products to be marketed. A more developed, more productive form of agriculture is plowing in subtropical areas and oases. Here z. T. achieved yields through irrigation that enable the marketing of agricultural products. Plantations are large farms that produce specifically for export. If the first processing takes place on site, one speaks of a plantation. Since in the past production was exclusively determined by the customers, there was a one-sided orientation of the economy of entire countries
(e.g. Kenya: sisal; Angola: bananas, coffee; Ghana: cocoa). TheseThe mono-economy results in one-sided dependence on the world market and leads to country debt through fluctuating prices. The main products of African agriculture are shown in Figure 15.

Africa is rich in mineral resources. So z. B. in the Republic of South Africa, in Namibia, Zambia, Zimbabwe and the Democratic Republic of the Congo u. a. Gold, diamonds, platinum, antimony, copper, manganese and chrome mined.
Significant oil deposits are exploited in Nigeria, Algeria and Libya.
In addition to agricultural and mining products, precious woods are also exported. The main trading partners are the EU countries and the USA. The finished products are mainly imported from these countries. However, the trade balance is mostly negative.
Debt levels have even increased in most countries in recent years as the gap between raw material and finished goods prices widened.

An all-African transport network that has efficient transcontinental connections does not exist. Railway networks exist only in North and South Africa. The road network is still very wide-meshed, but is being expanded.

Significant African empires still existed until the 19th century.
The massive colonization of the continent by the European powers began in the second half of the 19th century. Portugal, Great Britain, Belgium, France, Italy and Germany in particular conquered, occupied or acquired large areas of Africa (Fig. 16).

The principles of division among the powers were laid down at the Berlin Conference in 1884/85. France (West and Central Africa) and Great Britain (East and South Africa) emerged as the dominant colonial powers.

After the Second World War, the colonial system began to disintegrate and the countries of Africa gradually became independent. Especially in the 1960s, the independence movement spread like wildfire across the continent. However, many countries are still connected to the former colonial power through business and language.
In many countries, the colonial regimes were replaced by corrupt dictators from the local upper class. Only after 1989/90 did successful democratization take place in Africa, such as the abolition of apartheid in South Africa.

However, coups and revolts that culminate in long civil wars are very common. This also applies to massacres and pogroms, e.g. B. 1994 in Rwanda or currently in the Democratic Republic of the Congo, which can lead to the extermination of almost entire peoples.
Deeper cause for this is u. a. the arbitrary demarcation by the colonial masters, which has led to serious ethnic or religious conflicts.
Another problem is corruption, which is widespread in many countries at all levels of society.
And finally, most countries have little opportunity to use their sometimes great economic potential. Because of the extreme debt the necessary capital is not available to them or multinational corporations primarily assert their interests, as in Nigeria’s oil industry.